130mm thick ceiling grid for use in cleanroom

Due to the increasingly demanding market in which the company Klimaoprema has started working on projects, the R&D department of Klimaoprema was given the task of developing a new type of grid ceiling for use in spaces where strictly controlled air conditions are a must. Said spaces are intended for scientific research, pharmaceutical manufacturing, microelectronic manufacturing and similar work, and the ceiling serves as an element for ensuring a clean space. The main characteristics of the ceiling are permeance and a thickness of 130 mm, which allows the integration of most ceiling elements, as well as cable laying within the overall dimensions of the ceiling. Wiring is performed through grid profiles, with the possibility of connecting the elements inside the panel. 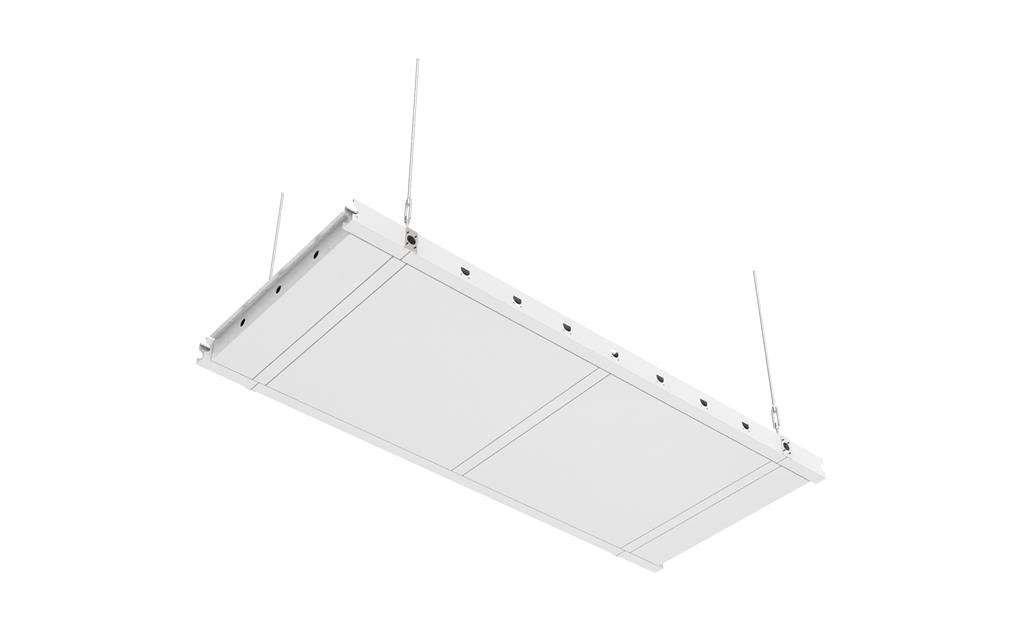 
Development and production
When constructing the elements of the grid ceiling, special attention was paid to compatibility with other elements of the cleanrooms architecture, fast position planning and simple and standardized installation. The development procedure consists of construction according to the input parameters that the product should meet, prototyping, compatibility testing, loadbearing testing and, if necessary, potential finishing touches.
The production of ceiling elements is automated due to their usually standard nature and the need for fast delivery of large quantities of ceilings. It takes place on an automated production line in the manufacturing plant Nova Gradiška, and includes plasticized bale sheet punching, bending with a brake and palletizing. This significantly speeds up the production process and ensures high repeatability and quality of all manufactured parts. With such a production process, the influence of the operator on the quality of the product is minimized. The stability of the ceiling construction is ensured by the geometry of the elements and the connecting elements. Thus, the need for welding has been eliminated from the production of individual elements, which enables automated production without the need for subsequent surface protection in the form of plasticization. 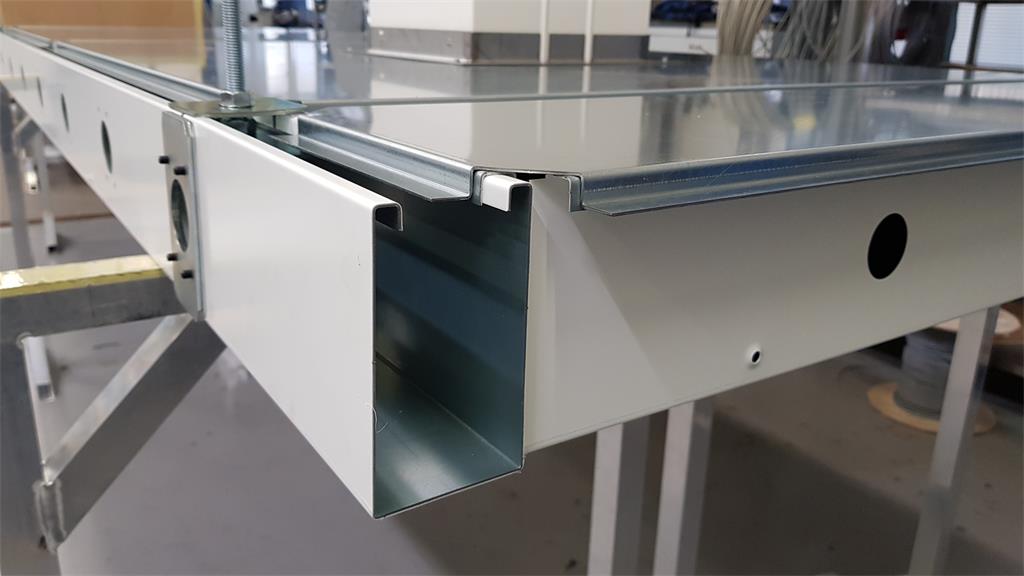 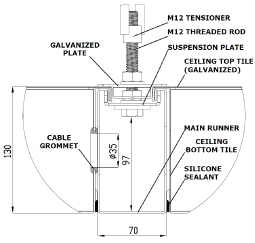 Testing
Testing the loadbearing capacity of the ceiling was performed according to the requirements of thee EN 13964: 2014 standard. The test was carried out in the laboratory of the IGH Institute. The test procedure includes loading the ceiling with predefined masses according to the guidelines from the standard.
During the test, the test sample was loaded with bags of quartz sand of known mass, evenly distributed over the surface. Sandbags were placed on the top surface of the ceiling. The loadbearing capacity was defined by the manufacturer, and the values ​​were 2.5 Kn/m2, 3 kN/m2 and 5 kN/m2. During the loading procedure, the initial value was 80% of the loadbearing capacity. The load was increased in 5% increments of loadbearing capacity. Load increments were implemented uniformly in less than 60 s. Each load increment was maintained for 600 ± 10 s. The mass of the sandbags required to achieve the total desired loads for all five load increments was calculated in advance. After the load had reached the total target amount corresponding to the loadbearing capacity value, the test sample was unloaded and the residual displacement was measured each time. Displacements during static testing were measured with linear variable differential transformers at seven measuring points which are in accordance with the positions indicated in the figure by the designations L1-L7. 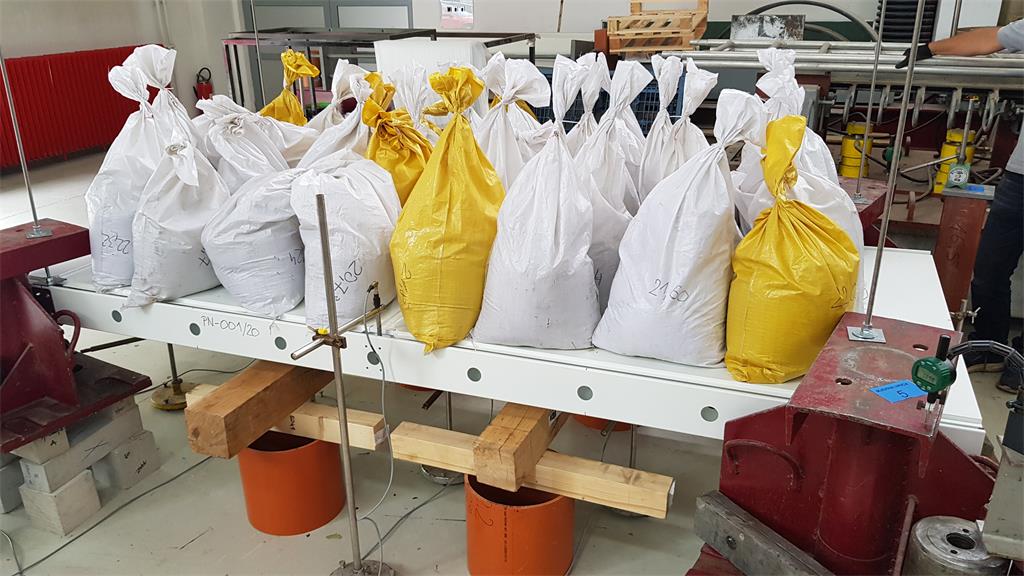 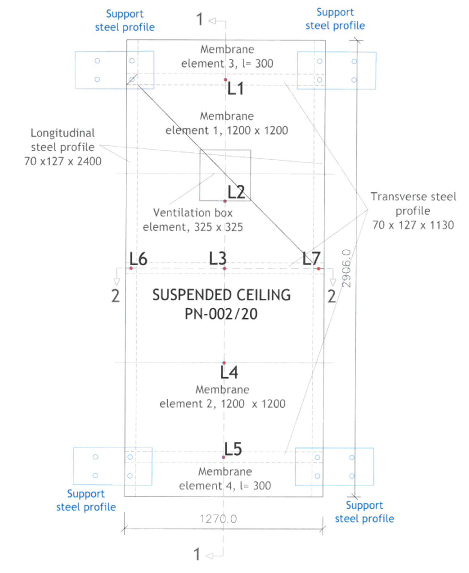 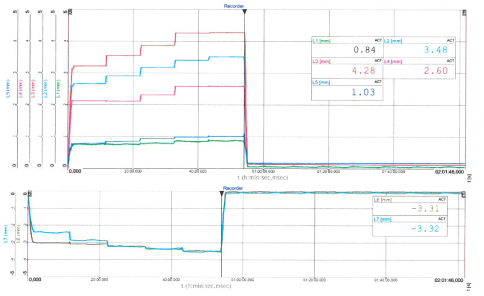 Results of ceiling deflection under a load of 2.5 kN/m2


Design and installation
Ceiling design is performed in the Autodesk Revit software package according to the design instructions. In order to make both the design and installation easier, most elements are standardized, and a total of 5 standard profile dimensions are used. When it comes to the production of panels, there is certain flexibility and the panel dimension and the position of the openings in the platinum changes relative to the needs of the project. Ceiling installation is performed according to project documentation, technical drawings and installation instructions.

Design of the ceiling elements in the Autodesk Revit software package 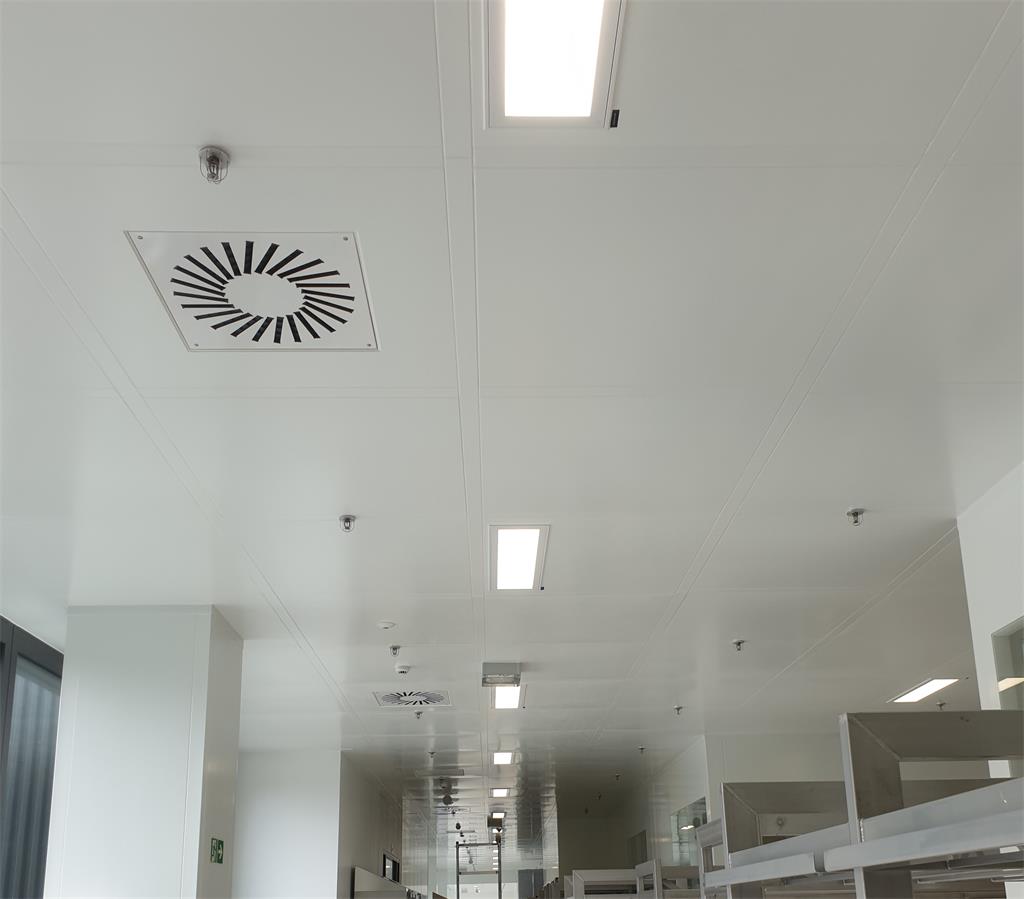 A finished ceiling within the Peregrine project; Lonza